Waking up in London with the smell of a Spanish omelette is not the norm for most Londoners. Except for Nieves –owner of Embutique– who works hard during the early hours to make sure the customers of her stall in Leather Lane Market can enjoy a freshly cooked tortilla – “the way we Spaniards like it”. Nieves, similarly to Ana or Manuel, is one of those unsung heroes that makes London one of the best places to eat Spanish food outside Spain.

They usually work outdoors, in music festivals or street markets. Some days you can even find them pushing their trolleys under the London rain. Many years ago, they abandoned their life in Spain to pursue their very own adventure: showing the British people the best of the Spanish gastronomy. Today we talk with Ana, Manuel and Nieves about their experience and how they decided to champion the Spanish food in London.

Ana was convinced that the world could not live without the wonderful croquetas from her grandma. She then abandoned a promising career in the fashion industry to grab an apron and create Croquetas Vigar. 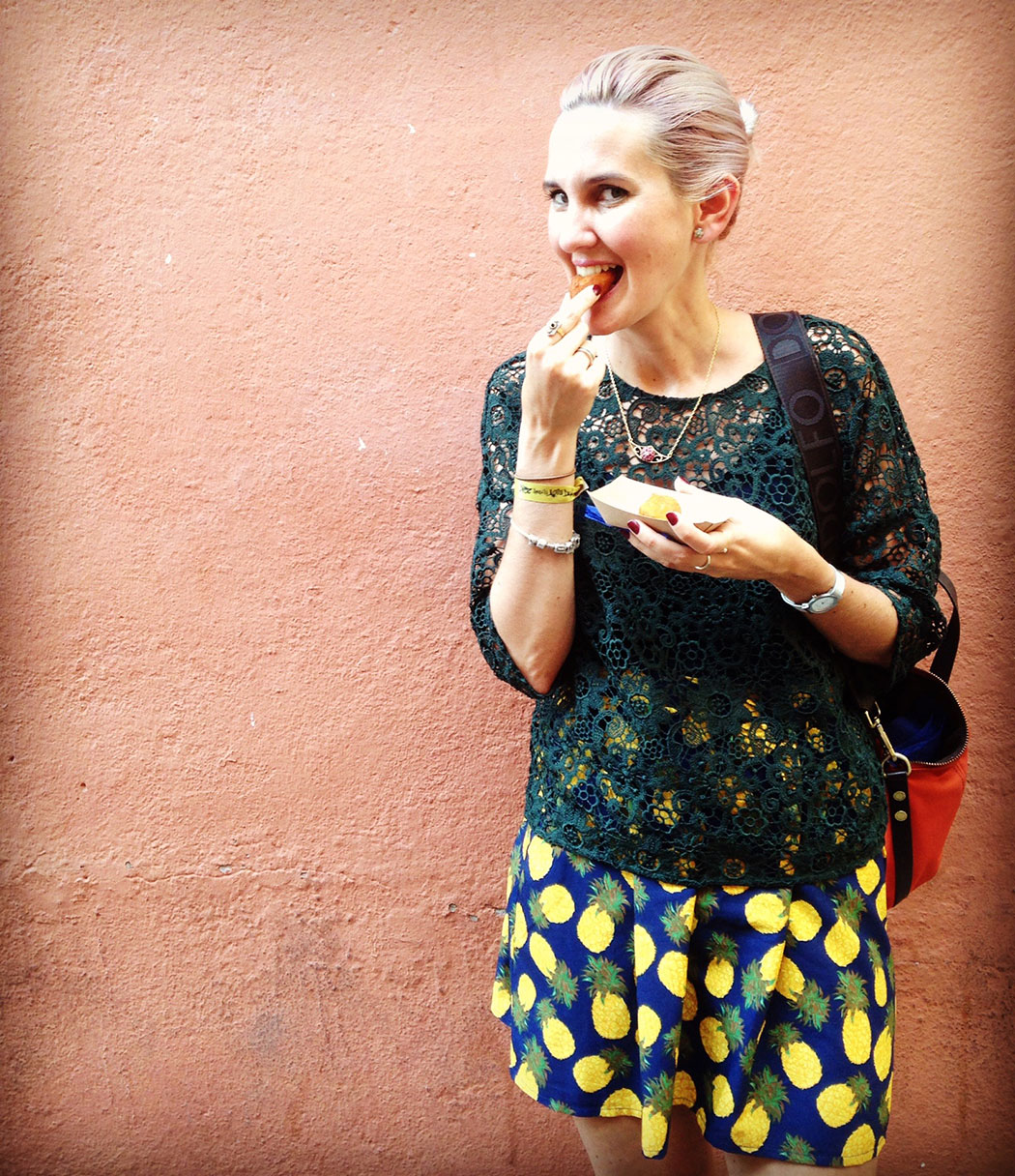 “Like all expats, there’s always something that makes you come back to your own origins. For me that was my grandma’s croquetas” – Ana says. “I come from Malaga but I studied in Madrid. From Madrid I moved to Paris before I landed in London eight years ago. Wherever I’d go, my grandma would always make croquetas for me. Every time I’d share the croquetas with my friends, the reactions were so positive than I thought of sharing my passion and my grandma’s recipe with the rest of the world”. That was the starting point for Croquetas Vigar, the business from where Ana takes her homemade and perfectly fried croquetas to most music festivals in the UK and several food markets in London.

It is no secret that Spanish food is super trendy these days and Ana was savvy enough to take advantage of this boom. Today, hordes of customers approach her croquetas stall. Sometimes they are Spaniards who miss the authentic flavours from back home. But many other times, the customers are not aware of the recipe: “Many still hold the idea that croquetas –or ‘croquets’ as they call them– are made of potato. We still have a long way to explain and educate the British public about what a real Spanish croqueta is. A croqueta is not made of potato. It is not a falafel nor it is an arancini. Spanish croquetas are made of creamy bechamel!”. 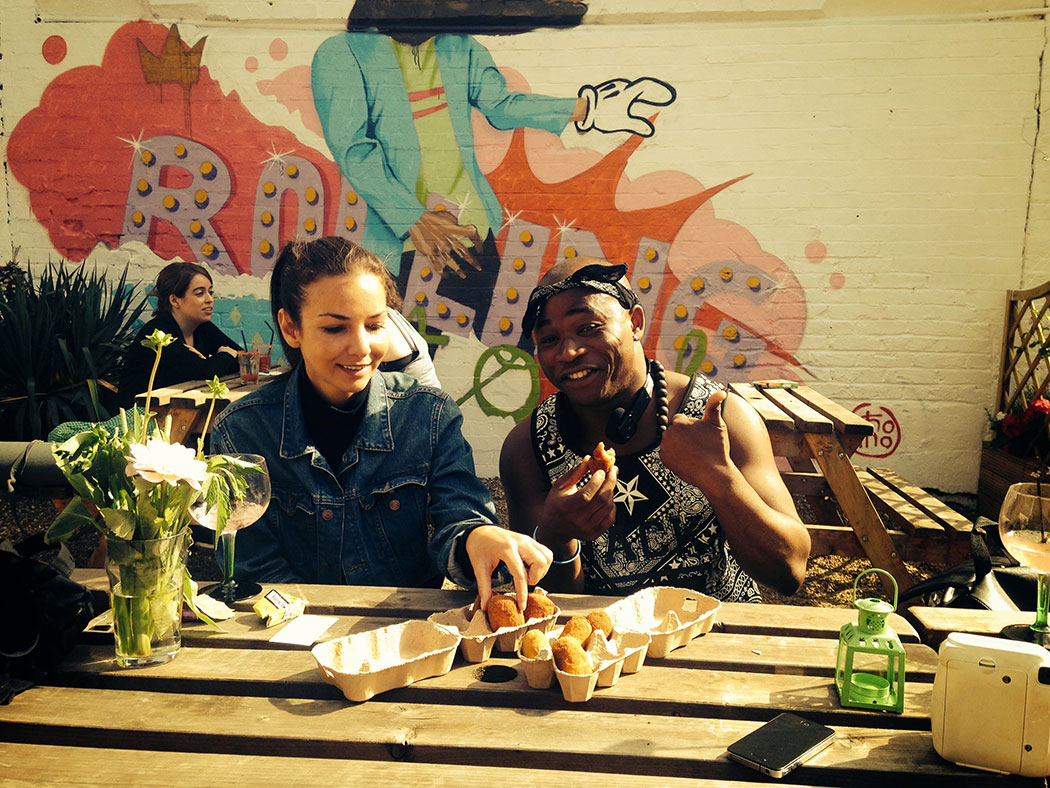 True that Ana often adapts her menu to the local taste, selling croquetas that are not all that common in Spain, such as the chorizo croqueta, the spinach one or the more creative sweet ‘brownie croqueta’. But still, the most traditional flavours are usually the most successful, and her grandma’s traditional recipe is still the first one to be sold out in every single festival.

The search for those traditional flavours was the reason for Manuel to start his very own gastronomic adventure: “Eight years ago, during a trip to New York, I discovered a couple of shops which would sell ‘tortas de aceite’ (a type of olive oil biscuits) from Castilleja de la Cuesta. I was amazed to discover how a product that was very local to me, had such a great potential internationally” – explains Manuel. “I was going through a complicated period at work so I decided to spend a year travelling across Spain and looking for local products. Originally the idea was to set up a shop in Barcelona. But my partner and I decided to move to London instead. We applied for a stall in Broadway Market and we eventually got it. That is how we created Santos & Santos” – continues Manuel. “Things went well so we evolved our business from our Saturday-only stall to distributing Spanish products to restaurants and more recently into the opening of our new Dalston deli shop”. 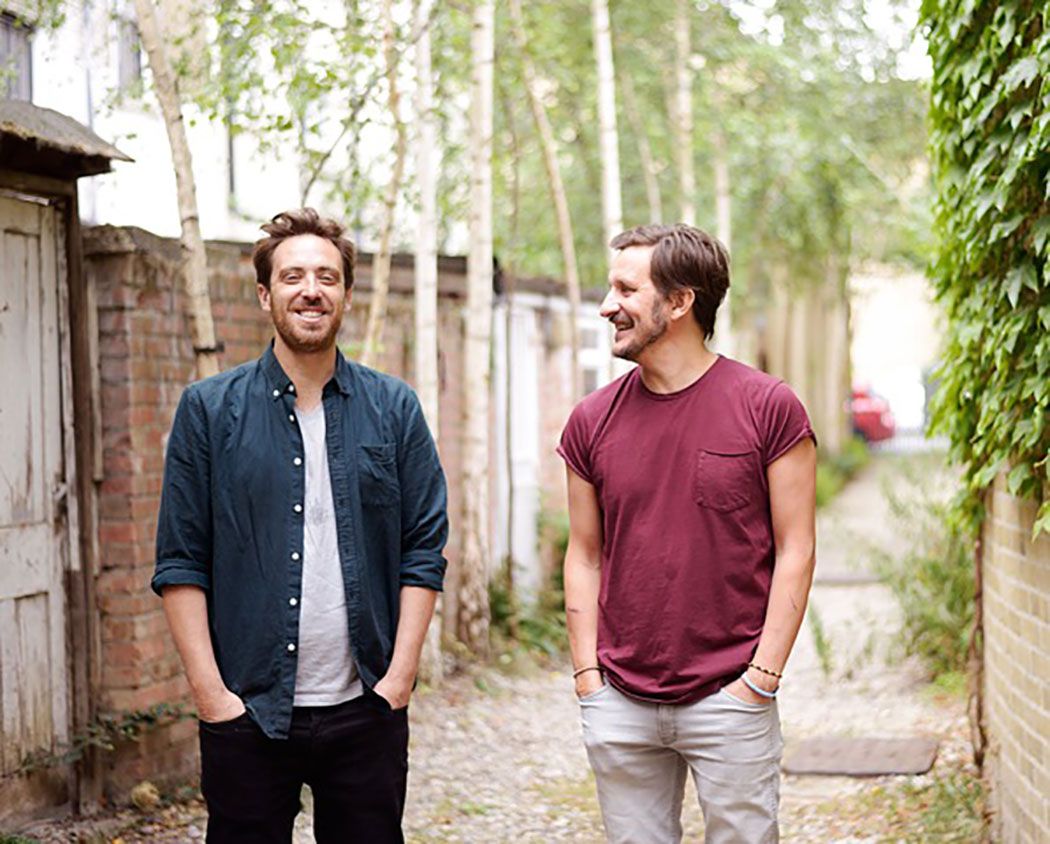 Manuel from Santos & Santos with his business partner Xabi.

The Santos & Santos philosophy is focused in offering well-above-the-standard-market quality. “We travel Spain looking for high quality artisan products made by small independent producers. We focus our search in raw-milk cheese, Spanish hams which are free of any nitro salt compounds and artisan dry-cured meats. We love working with family businesses that look after the products with love and care. These are people who don’t treat their jobs as a business only but as a lifestyle option, in the same way we approach our own jobs. Our customers are mainly restaurants that value our honesty and passion for the product”.

Unlike Ana, Manuel doesn’t have the need to explain what his star product is. “Most customers know about Spanish ham, although they find it tricky to understand the various types and qualities of the iberico ham”. That is the reason why Manuel strives to educate every customer who approaches his East London stall in Broadway Market. “At the beginning, I wasn’t sure whether customers would appreciate the differences and subtleties of the 100% acorn-fed iberico ham. Now I am very please to admit that I was wrong. We have customers from all around London who come to our stall to buy this product” – says Manuel. “It is a different story when the customer is a restaurant. Iberico ham is best served when it is hand-carved. The base cost of this product plus the carver makes it challenging for restaurants to generate a decent enough margin. That is why our best-seller product is Andalusian cheese”. 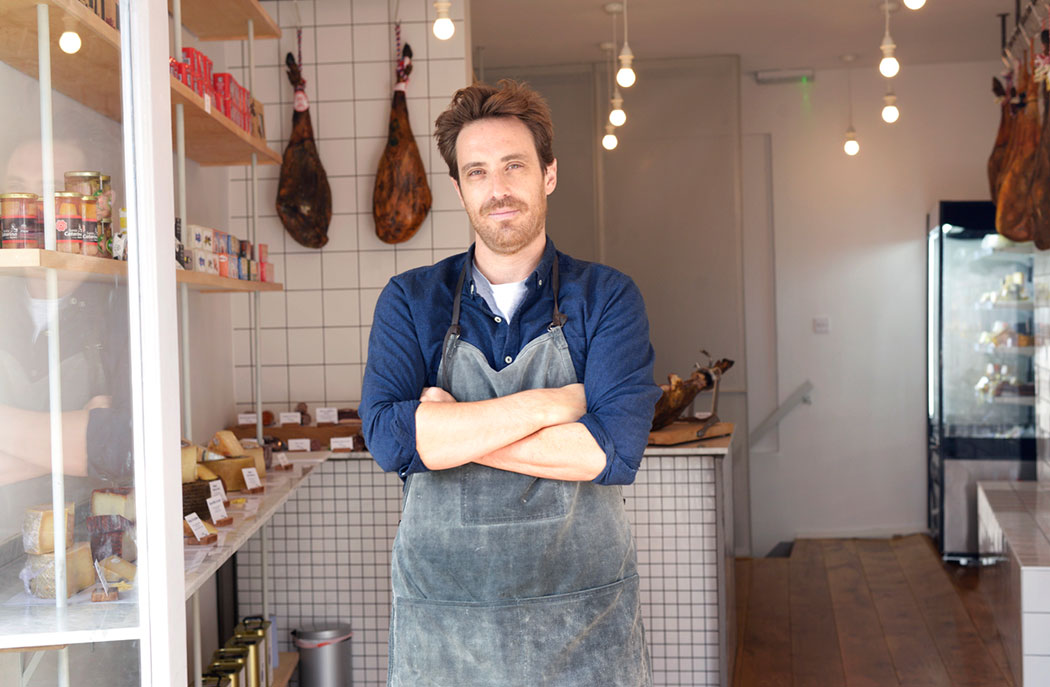 Manuel inside his Dalston shop ‘Furanxo’.

Life today is sweet for Santos & Santos. Few months ago – partnering with tapas restaurant Trangallan – they decided to open London’s first Sevillian ‘abacería’. The ‘abacerías’ are Andalusian groceries where you can also drink and eat the products that are found in the shop. It is called Furanxo and it is the newest addition to the already-booming Dalston food scene. Here you will find the wonderful dry-cured meats and the cheese from Santos & Santos. But also, you can find a fantastic selection of ‘conservas’, the Spanish preserves which despite not being –yet– very well known in London, they are a hugely popular component in the suitcases of every Spaniard travelling to London from Spain.

There was a time when Spaniards would load their suitcases with local Spanish products every time they would go back home from London. The strong feeling of missing out such great products was the incentive that Nieves needed to launch her Spanish food business: “After three years in London, I was still missing many food ingredients from back home. Products that were either impossible to buy here or too expensive when you could find them. That is how –with the help of my friends and my sister– Embutique was born”. 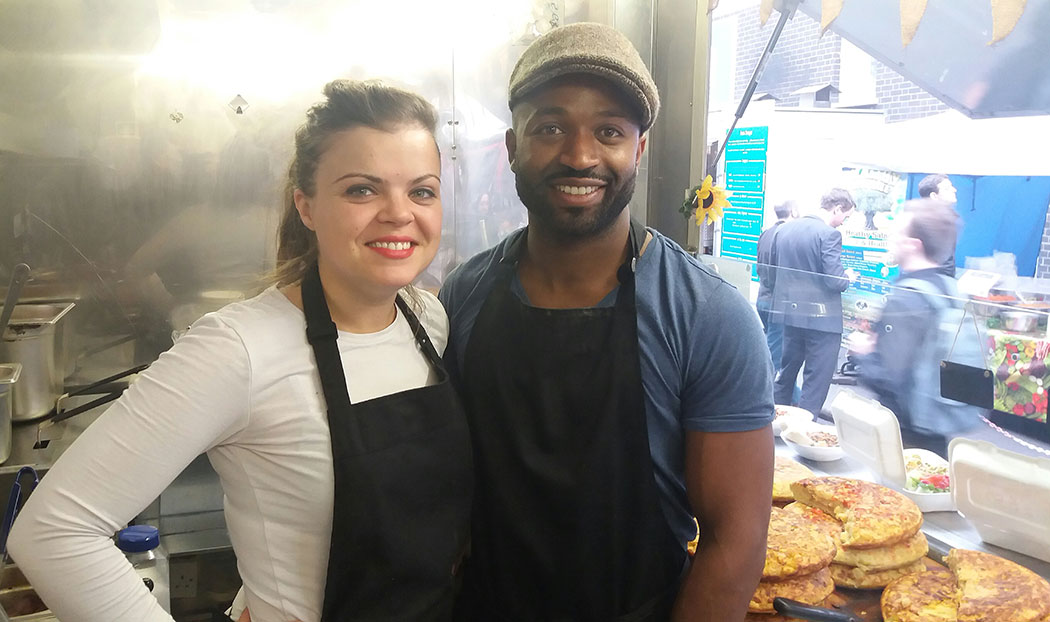 Nieves and her business partner.

The project quickly evolved from being an e-commerce, offering Spanish products at very reasonable prices, into a food stall in Leather Lane market, offering a seasonal menu of homemade Spanish specialities: “We sell tapas as a selection of small dishes, all typical from Spain, that our customers can mix & match in a takeaway box” – Nieves explains. “We offer specialities such as Spanish omelette, croquetas, marinated chicken, Galician chorizo, meatballs and a selection of salads as a side dish. During winter, we also offer cocido (a traditional chickpeas-based stew) and lentils stew. And in the near future, we also want to start serving Spanish breakfasts, including churros and bread with tomato”.

With such a great variety of delicious homemade Spanish food in offer, it is easy to understand why there are so many Spaniards who come to Embutique looking for those familiar flavours that are so missed when living in London. But Nieves is also able to adapt some of the recipes to the non-Spanish palate, adding sauces or a salad to the chorizo sandwich and offering this way a more personal twist on the traditional Spanish recipe. 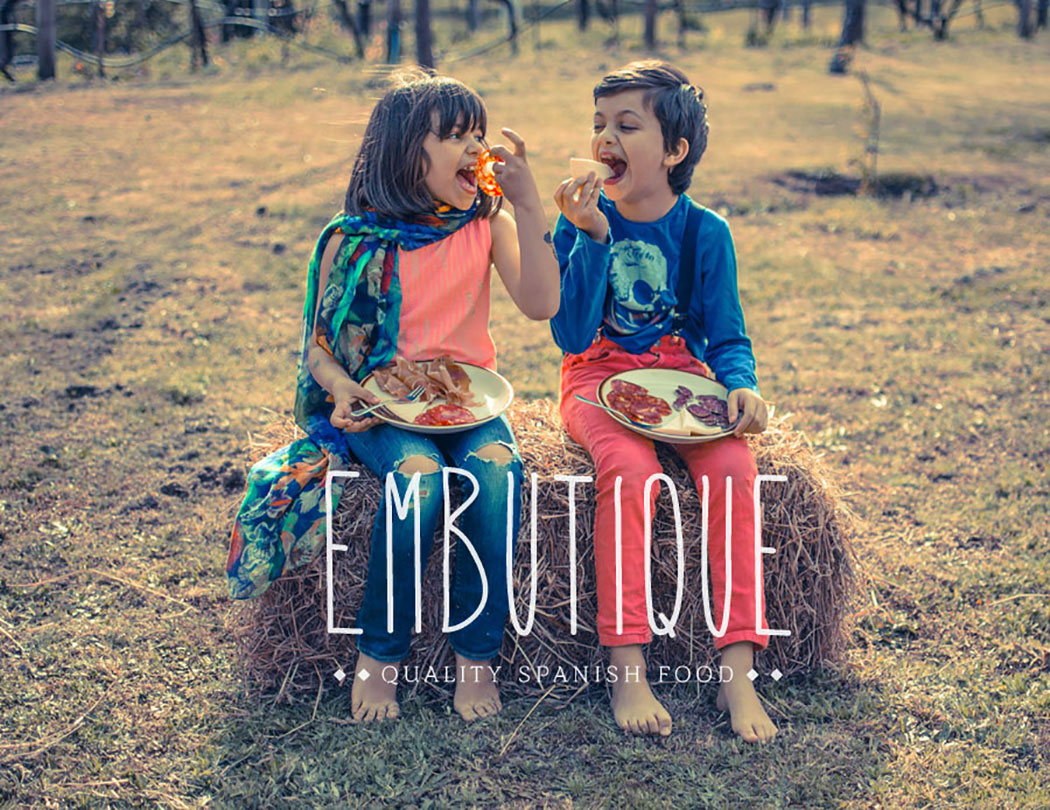 The idea behind Embutique – now expanding thanks to the arrival of a new partner – is to move away from the most popular Spanish dishes to introduce other less known but equally as tasty recipes. So when you visit Embutique’s stall, you might not find paella but you will find a potato and chorizo omelette which is to die for!

Nieves agrees with Ana and Manuel in acknowledging the boom that Spanish food is enjoying in London. “The more Spanish food businesses there are, the easier will be to introduce Spanish products in the daily diet of Londoners” – says Manuel. We agree with Manuel that more authentic Spanish bars and shops are necessary in London. But until that happens, people like Nieves, Ana and Manuel offer excellent options for those who are after high-quality Spanish products, made with plenty of love by these talented unsung heroes of the Spanish food in London.