José Andrés : ‘When I arrived to the US, all I wanted was to bring real tapas. Not just the foods that every Spaniard knows and craves but also the style of sharing and trying lots of things together at one table’

His professional career spans from an early job at the legendary elBulli –next to a young Ferrán Adrià– to cooking for the Spanish Navy or more recently, being referred as ‘the quintessential American success story’ by President Barack Obama. The life of Spanish chef José Andrés has been an ongoing adventure for the last 26 years, when he arrived stateside with only 50 dollars in his pocket but the strong determination to lure Americans with the enticing world of Spanish tapas.

Today, we have the great pleasure to chat with José Andrés –perhaps the trendiest latin chef in the US– about his American adventure, the 22 restaurants he owns around the US, Mexico and Puerto Rico and about his very significant philanthropic mission to change the world through the power of food. Who said that chefs don’t come out of their kitchens? 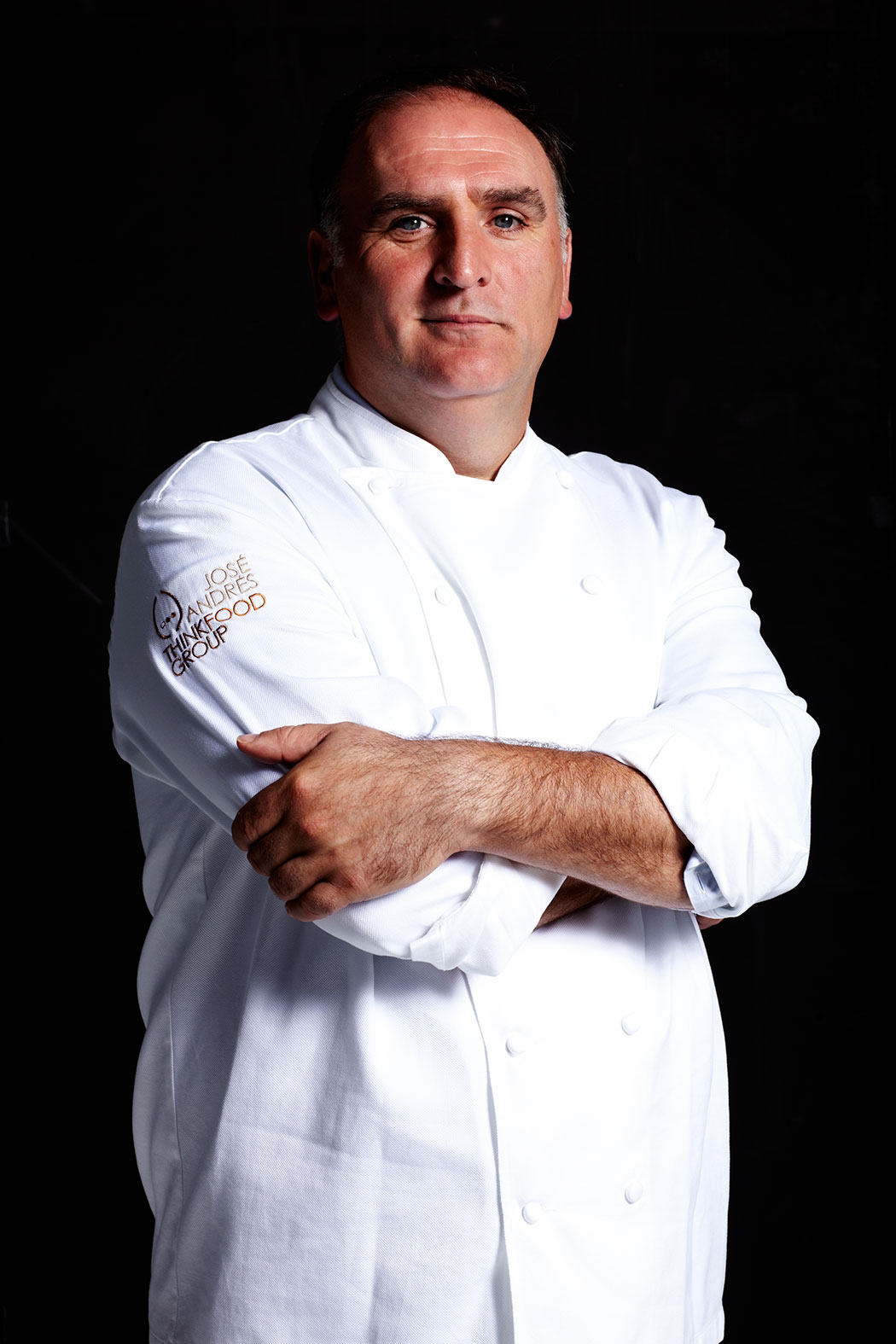 You had an unusually early start in a professional kitchen, at the tender age of 15. How and when such a young person decides to become a chef?

Growing up, I was never really a student of the classroom. I was a student of life. I wanted to see the world, and when I was younger, I thought that was through the Navy. My dream was to go on the Juan Sebastian Elcano, and as fate would have it, I got my wish during my time serving Spain. Sailing on that ship was an incredible experience that helped shape the man I am today.

“The foods I was able to taste and see during my time on sailing fed my passion to be a chef and change the world through the power of food.”

At this point I had already gone to culinary school and worked for Ferrán at elBulli, so cooking was in my blood. Sailing and cooking on that ship helped me travel to some of the most amazing places and meet incredible people. That was my destiny, and being a chef helped me achieve that.

As you just mentioned, you had the opportunity to work at elBulli. Today we know elBulli as the world’s most influential restaurant that has ever existed. But back in the time, when you were there… were you aware whatsoever of the fact that you were writing an entire new chapter in the history of gastronomy?

Everyone knew that something really incredible was taking place. I often describe it as “the big bang” and I am so lucky to have been a part of it. Every day was an intense journey, working non-stop on your feet, with your mind fully engaged, learning, and challenging every assumption you may have about food. I loved the scientific approach of questioning and seeking to understand why it works this way, and why can’t it work a different way? 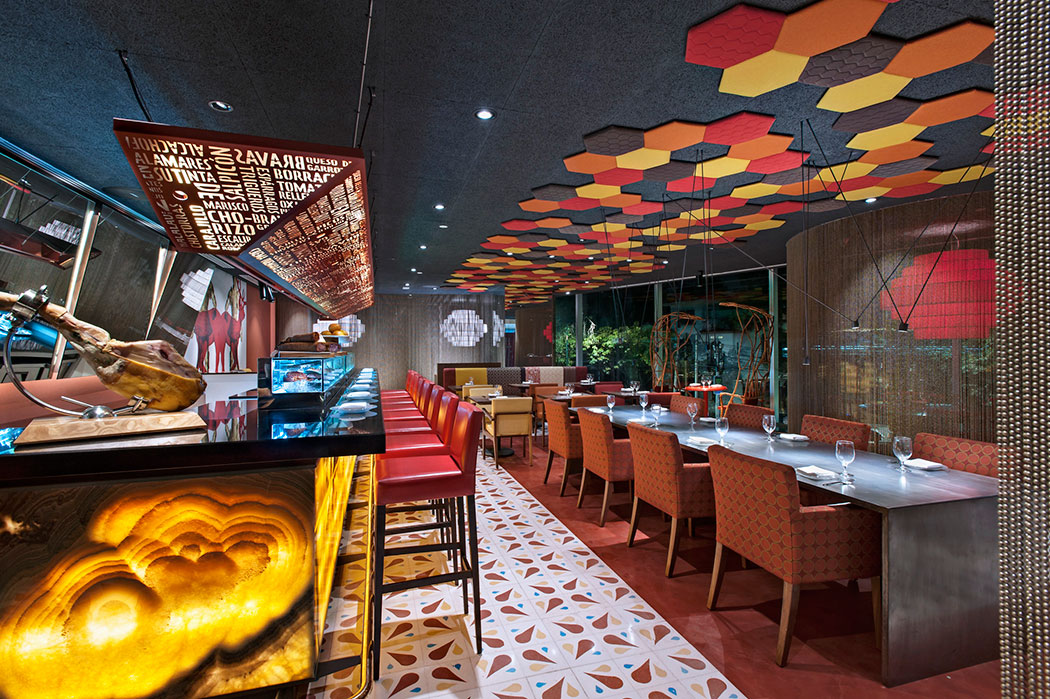 You were only 21 when you decided to move to the United States, perhaps a less attractive choice than other European countries from a gastronomic point of view. What was your motivation to choose the US?

Who doesn’t dream of coming to America? This is the land of dreamers and doers, where immigrants have come for generations to build a better future for themselves and their families. When I first arrived in New York, I saw a man selling hot dogs for a dollar. I thought to myself, if this man can make a business out of nothing more than a street cart, then this was the place for me. This was my American dream. I came with my chef’s knife, ready to work!

“It is important to remember that nothing is possible without the people you surround yourself with.”

We know you arrived to the US with only 50$ in your pocket. 20 years and tons of hard work later, you have become a celebrity chef, a successful businessman, a thought leader and according to some lists even one of the world’s 100 most influential people. How do you feel when Barack Obama refers to you as “the quintessential American success story”?

I feel humbled. I came filled with drive and ambition and this country gave me the opportunity to be successful. But, it is important to remember that nothing is possible without the people you surround yourself with. My team has given me a tremendous amount of support and growth, and it’s thanks to them that I’ve gotten this far.

“What was missing was the culture and spirit of Spain, of not just what we eat but how we eat it”

How much the American people knew about Spanish cuisine when you first arrived to the US?

People’s knowledge of Spanish cuisine was very limited. There were pockets of it here and there, but what was missing was the culture and spirit of Spain, of not just what we eat but how we eat it. In Spain, eating was a social event, and tapas were to encourage sharing and conversation.

Then you opened Jaleo, your first restaurant in Washington DC. You have said before that your first goal with Jaleo was to teach America about Spanish tapas. 20 years later, how do you feel the American people have developed their knowledge on Spanish food?

It’s amazing today the difference and how often someone will come up to me and say “I tried to make a paella or tortilla at home and it didn’t come out quite right. Am I using the right rice or how long do you cook this or that?” People are not just going out to eat Spanish food but trying to make it at home, too! There is a huge interest in learning about food, where it comes from, who makes it, and it makes our guests today much more informed and engaged. 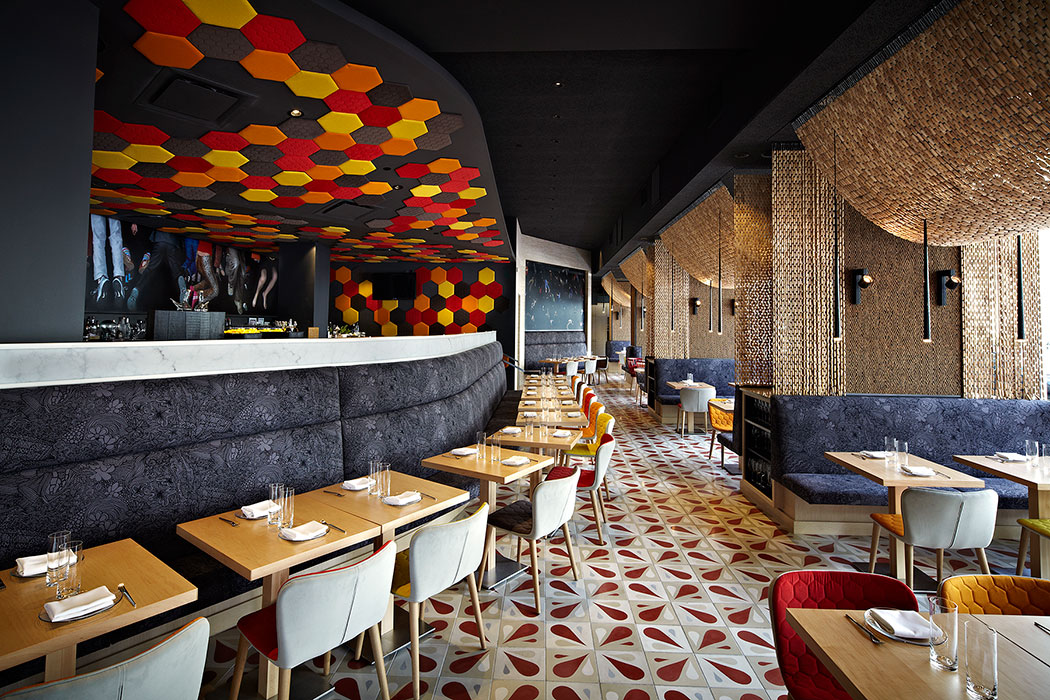 You witnessed the beginnings of the Spanish cuisine within the United States. What would you say it was the key factor that facilitated a better understanding of our cuisine and therefore a stronger recognition? Do you believe Jaleo played a key role in all this process?

I certainly hope so! With Jaleo I wanted to bring real tapas to the United States, not just the foods that every Spaniard knows and craves but also the style of sharing and trying lots of things together at one table. Spanish cuisine has become popular in the US for many reasons and I hope in part because of how committed we are making really delicious, amazing food at Jaleo in a place that is lively and fun. We do our part to show the heritage, quality and spirit of true Spanish dining.

Nowadays that tapas are well known and somehow trendy all around the world, what is the next challenge for our cuisine? What are the next steps?

To keep evolving. Spanish food is not one kind of dish or just the classics. You go to Madrid Fusion and you are surrounded with innovation and exploration. That is the spirit of our test kitchen at ThinkFoodGroup and what keeps us moving forward.

A dream of yours is that every single American keeps a paella pan next to their BBQ. How close do you think you are from this ambition? Do you think Spanish gastronomy can eventually become as popular as let’s say Italian cuisine?

Absolutely! People come to Jaleo not just because they want the food of Spain but because they want good food that makes them happy. It is like going out for pasta not because you want Italian food but because you want something comforting and hearty. Paella is a great example of a food that transcends its origins. People make it their own, they put in their favorite ingredients, and that is why everyone needs a paella pan at home. 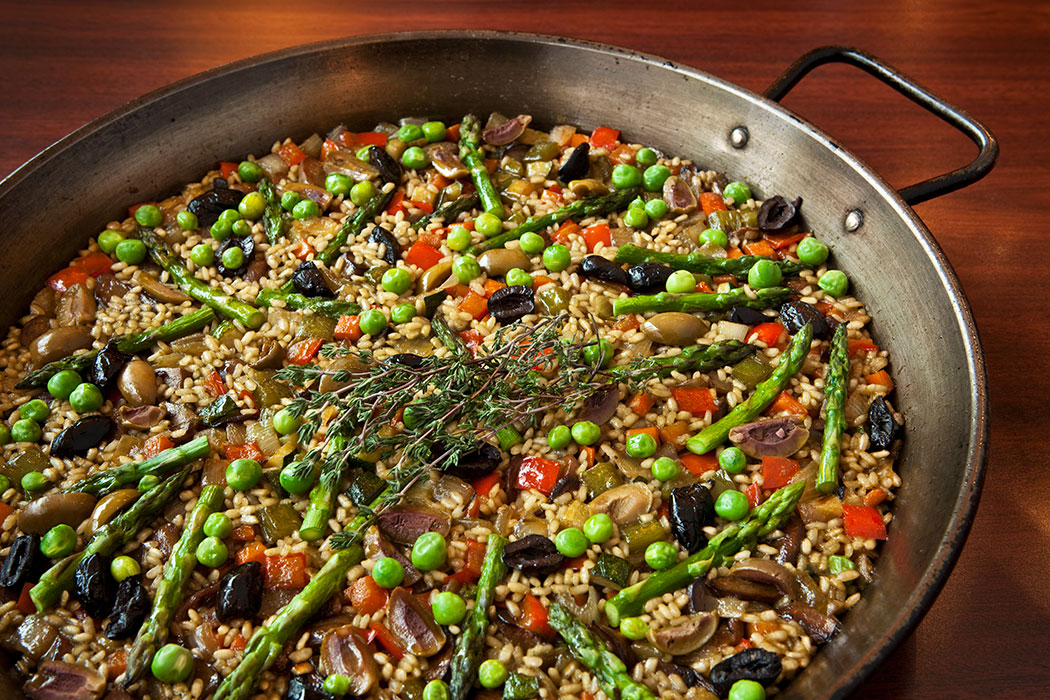 You have initiated an ambitious brave new project called ‘Beefsteak’ which puts every focus on vegetables. We say ‘brave’ because the United States are well known for their huge love for meat but perhaps less so for vegetables. What are you really proposing or trying to achieve?

With Beefsteak it is our mission to unleash the power of vegetables. Who says they have to be on the side, boring, overcooked, uninspired? No!

“Vegetables are sexy. Vegetables bring the colors of the rainbow to the plate. Try them my way and you will be a convert, too” 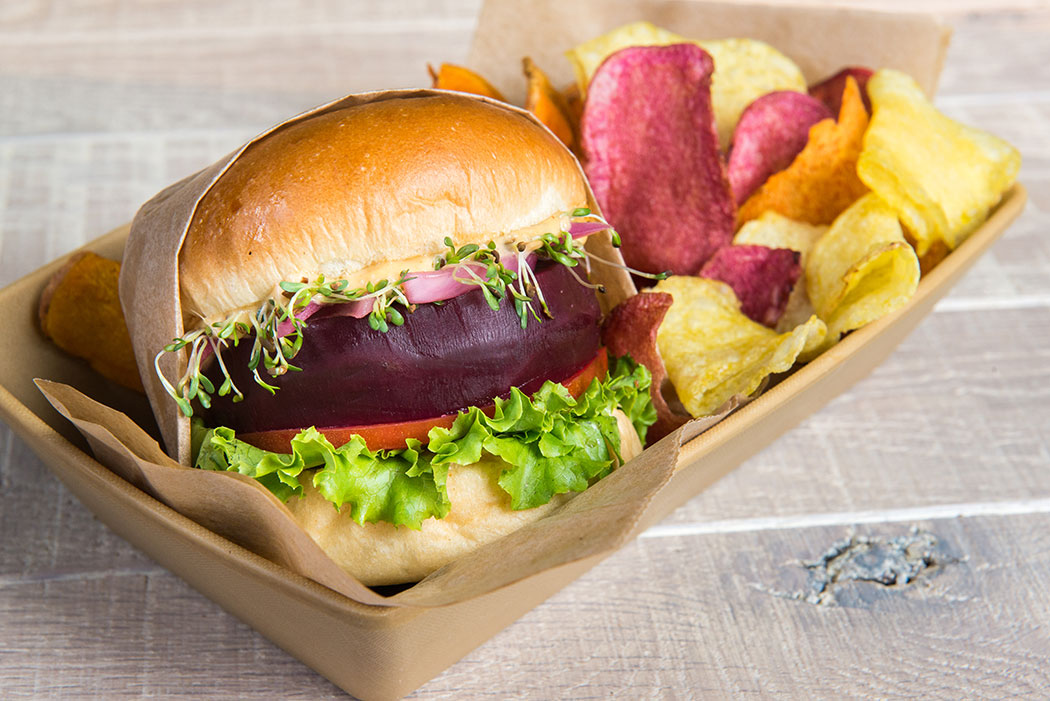 One of the veggie burgers at José Andrés’ Beefsteak

Tell us about World Central Kitchen. How did you come up with the idea and how did you manage to turn it real?

I went to Haiti after the earthquake in 2010. I came to help but I also fell in love with the unbelievable people and culture.

“In 2012, I founded World Central Kitchen to provide smart solutions to hunger and poverty by using the power of food to empower communities and strengthen economies” 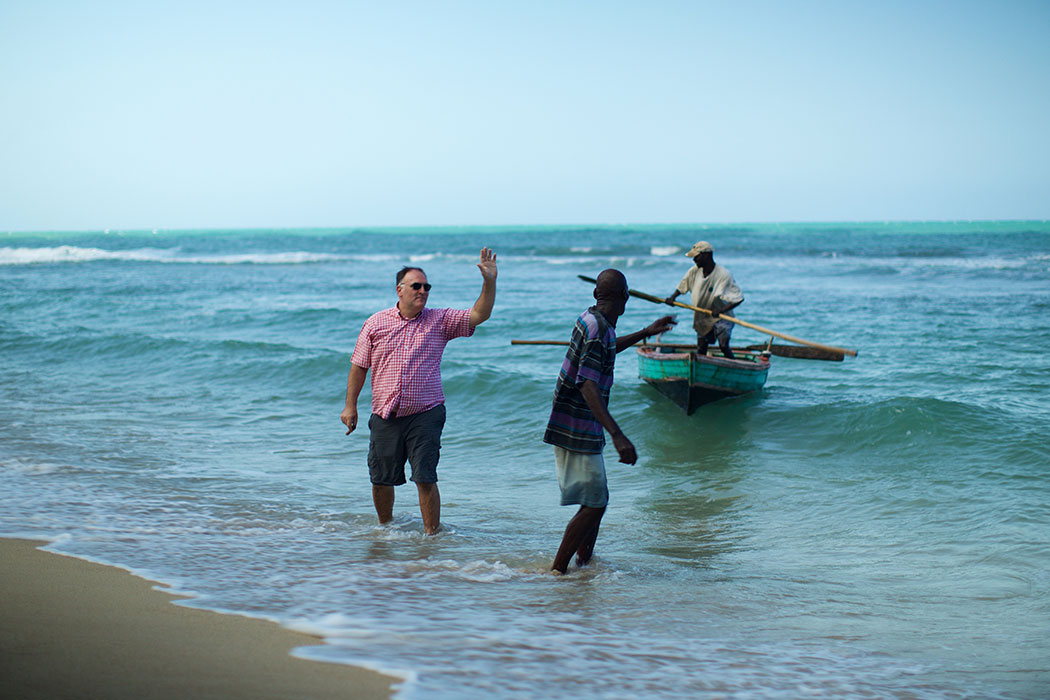 You are currently working on 10 projects in four different countries around the world. Is there one special project for you that you feel extra proud of?

I am proud of all of them. Every project is so vital. Recently, in Haiti, we opened the Boulanjri Beni Sustainable Bakery and Pwason Beni Fish Restaurant and trained the community in cooking and management, to create jobs and generate revenue for a Partners in Health orphanage. Clean cookstoves that use solar and liquid petroleum gas are a big focus. In Haiti, when people use clean cooking fuels instead of firewood, they’re helping to restore forests, and preserving farming and fishing industries. With the deforestation in Haiti, rains come and wash away the soil farmers would use, and it flows into the ocean and has an impact on marine life. The Haiti Breathes partnership between World Central Kitchen and Switch Haiti has converted 100 schools from unsafe charcoal cook stoves to clean liquid petroleum gas cookstoves, improving the health of more than 400 school cooks and more than 5,000 school children. I’m very proud of that.

Let’s say HolaFoodie is interested in collaborating with WCK. How can a project such as ours collaborate with any of your initiatives?

Help us spread the word to your people! Haiti is such a beautiful country, with a fascinating history and incredible food and people. Tourism has the power to support local communities and make them thrive, all we have to do is change people’s perceptions, and you can help us with that.

Planning to invite your friends over and cook something delicious for them? Spanish celebrity chef Omar Allibhoy brings us the perfect shareable party food:…