Chinese dim-sum, Turkish mezze, Japanese sushi… the habit of preparing food in bite-sized portions seems to be common to many cultures. Yet it is Spanish tapas –our quintessentially tradition of serving and sharing small portions of food– the culinary trend that it is giving name to an entire new approach to eating.

The idea behind Spanish tapas is intrinsically related with the concept of social eating. So much that when people go out for tapas in Spain, they are often as interested in the food as they are in sharing some quality time with their friends or family. This is crucial to understand what tapas are and what they mean for us Spaniards.

The concept, the word, the habit and the tradition of tapas are all 100% Spanish.

This very exportable aspect of the Mediterranean lifestyle has recently become so popular in countries such as Britain or the United States, that nowadays it is not difficult to spot Italian, British or even Japanese restaurants —amongst many others— offering tapas menus in an attempt to become more attractive to their customers. Tapas are now fashionable worldwide and they are here to stay. But let’s get one thing straight once for all. The concept, the word, the habit and the tradition of tapas are all 100% Spanish. 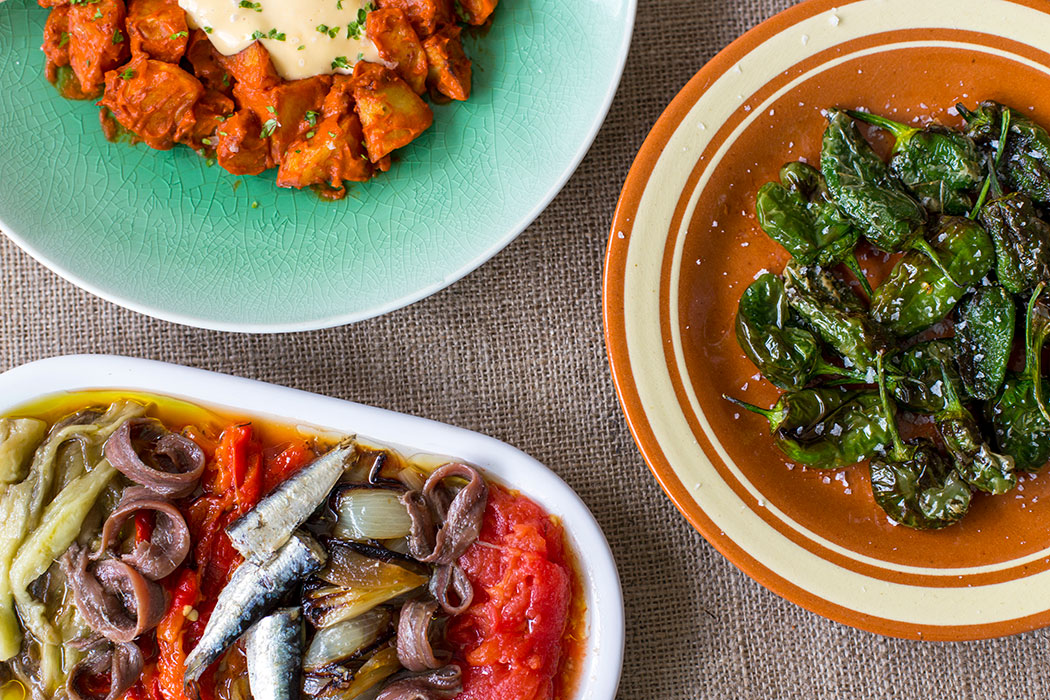 THE ORIGIN OF TAPAS

The word ‘tapa’ is Spanish for ‘cover’ and when used in a gastronomic context, it refers to the old habit of covering the drinks with a slice of bread or food. In a country where flies are often omnipresent, this action had the purpose to block the insects from flying into the drinks. Of course, there are several legends about the first person using a ‘tapa’ to cover a drink. And funnily enough, they all have a royal as a protagonist.

One of the most popular stories tells how during a very long trip, King Ferdinand II of Aragon decided to stop for a break by a roadside tavern. The place was so nauseating that the king asked the innkeeper to protect his drink from the dirt, to which the innkeeper responded by covering the glass with a slice of cured meat that effectively become the first ever ‘tapa’.

The legend says that the Catholic Kings imposed people to eat small bites before drinking as a way to reduce the number of road accidents.

Few years earlier, King Alfonso X ‘the Wise’, starred in another popular tale explaining the birth of ‘tapas’. Apparently the king got sick and the royal doctors recommended his majesty to drink wine in a regular basis in order to treat the illness. Since Alfonso was –as per his nickname states– a very wise man, he decided to eat small portions of food every time he would drink wine. The reason? To avoid constant drunkenness so that he could continue ruling the kingdom with a fresh and clear mind. Once he fully recovered and seeing the benefits from his action, Alfonso ordered all taverns to serve a small portion of food together with the drinks. Also the Catholic Kings allegedly adopted a similar measure, imposing people to eat a bite before drinking, as the ingestion of some small food seemed to drastically reduce the number of road accidents.

Whatever the true origin was, tapas became an established tradition in Spain. A tradition that has reached our days in good shape and it is now being exported all around the world.

True though that the Spanish tapas we can find abroad often have nothing to do with the ones we find in Spain. And the difference does not lie just on the ingredients.

Tapas are eaten whilst standing by the bar and they are often shared with your friends.

To start with, authentic tapas are not eaten seated. They are enjoyed directly from the bar and often shared around a group of standing fellows. That is why more often than not, authentic Spanish tapas bars do not even offer a seating area for their customers. And that is also why so much effort goes into the bar presentation, so that the standing customers are quickly seduced by the selection of available tapas before moving onto the next bar. And I say ‘moving onto the next bar’ because that is what ‘tapear’ means most of the times, to move from bar to bar with the rest of your group, enjoying each one of the specialities on offer. 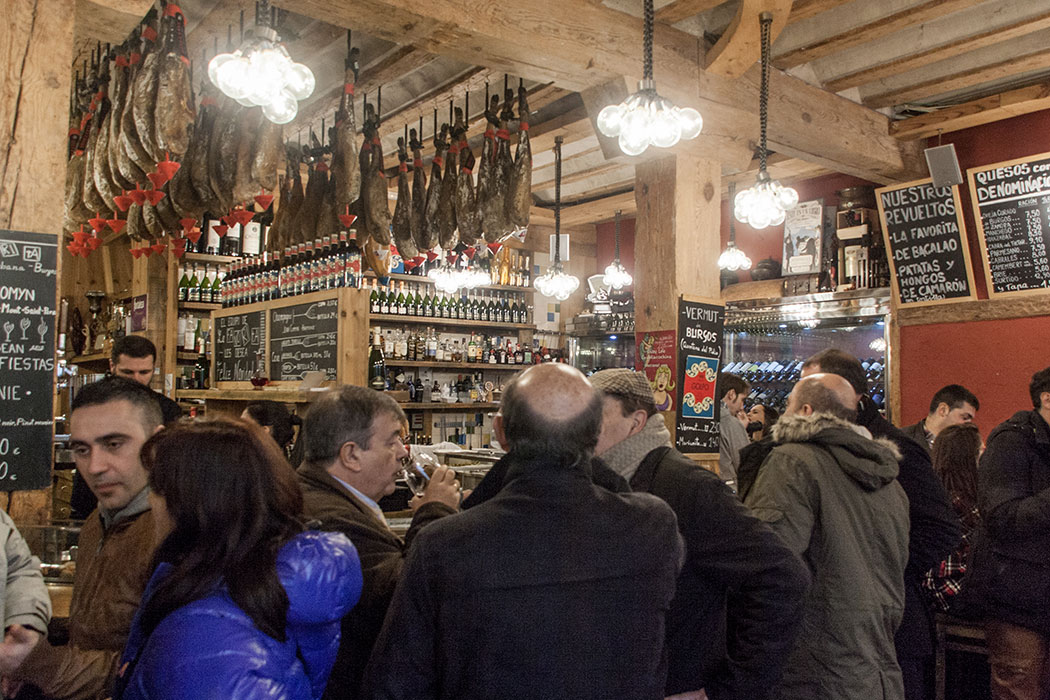 ANDALUSIA, THE BIRTHPLACE OF TAPAS

Although the concept of tapas is similar all around Spain, Andalusia is the birthplace of the ‘tapeo’ and one of the few regions where the tapa still preserves its original vocation. Here tapas are served free when the customer buys a drink. And although it is usually the waiter who decides which tapa comes with the drink, in the province of Almería it is the customer who makes the choice.

In Andalusia, you will often get a free tapa when you order a drink.

Other provinces such as Granada are famous not only for its tapas but also for their prices. For a bargain price of two euros you can have a drink and a free tapa! Same goes when you order a coffee, although in this case, what you get is a sweet ‘tapa’.

FROM THE EAST TO THE NORTH WEST

On the East Coast of Tarragona for example, the tapas bars are called ‘llesquerías’ and they specialize in toasts topped with a variety of cured meats, terrines and/or cheese. In Galicia on the other hand, tapas are way more consistent and they include ‘Galician empanada’ (a tuna and onion stuffed pastry) or the popular ‘pulpo a la gallega’ (Boiled octopus served with ‘cachelos’ —a local type of potato— topped with pimenton).

If you travel north, you will find out that Spanish northerners do not eat tapas, they eat ‘pinchos’ or ‘pintxos’ as they say in the Basque Country. ‘Pintxo’ means ‘to prick’ and it makes reference to how the tapas are served here, with a cocktail stick that ‘pricks’ the different elements of the recipe to hold them together in a similar fashion to a brochette.

In some northern regions, tapas bars are self-service and the bill gets calculated by the number of cocktail sticks left on the bar.

In many tapas bars of Asturias, León, Cantabria, La Rioja or Navarra, the customers serve themselves directly from the bar platters and without even asking the waiter for permission. Everything the deal requires is best integrity practice, mainly because it is the client who calculates the bill by counting the number of cocktail sticks —pintxos have all a standard prices here— which are left in the plate. 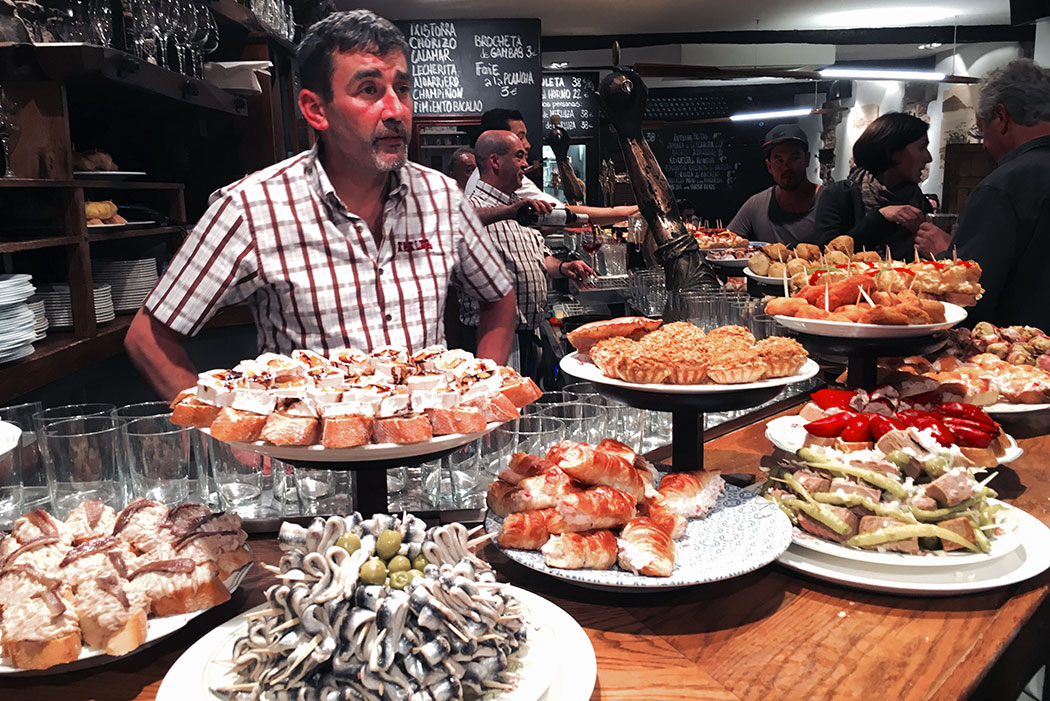 But of all the regions in northern Spain, there is one where the ‘pintxo’ has been taken to the next level: the Basque Country. And specifically the city of San Sebastián, the world capital of pintxos and the place where these small bites of food are so elaborate that they have reached gastronomy heaven status. Bars such as A Fuego Negro, Bar Zeruko or La Cuchara de San Telmo excel at serving miniaturized high-cuisine that keeps attracting thousands of visitors and foodies every year. 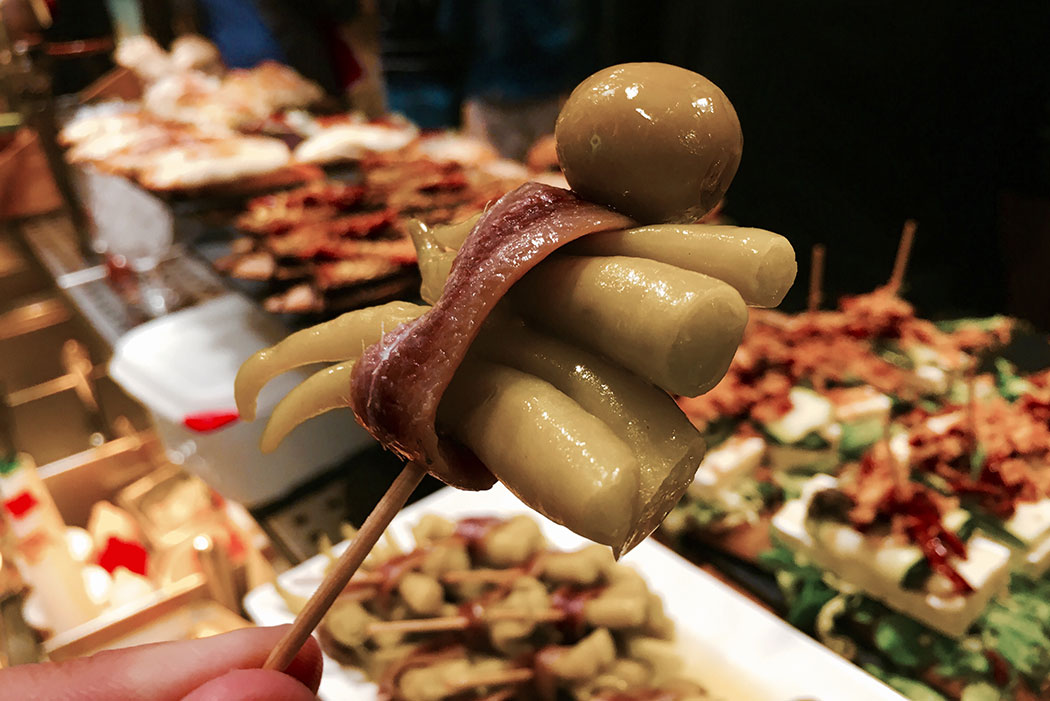 A ‘Gilda’ at Bar Sirimiri in San Sebastian.

Check our guide to the best pintxos in San Sebastian

We spend five weeks in San Sebastian to show you the best pintxos places to visit.

Whatever tapas, llescas or pintxos; wherever Granada, San Sebastián or Madrid; this very social way to approach eating —and life!— is nowadays extremely popular well beyond the Spanish borders. And the good news are that you can easily prepare Spanish tapas at home. All you need to do is to invite some friends over and check some of the great recipes we have prepared for you!

A tapas route: Burgos, the old kingdom capital of tapas
A tapa: Chorizo with cider
A book: Tapas: The Little Dishes of Spain by Penelope Casas

Flames up. Calçots on the grill. Roll up your sleeves and put your paper bib on. Today is not the day to wear your…