The simple mention of Andalusia is often enough to transport ourselves to the endless beaches of Malaga or the sunny streets of Seville – with its buzzy taverns, its flowered balconies and the salty aftertaste of its famous deep-fried ‘pescaitos’. But somewhere in between the Costa del Sol and Seville, a less known side of Andalusia hides between mountains and olive groves.

The ‘Sierra de Grazalema’ spreads across a region inhabited by a maze of hills and valleys, hosting a handful of small whitewashed villages (pueblos blancos) which remain unspoilt by foreign tourism.

The best way to visit this area is by following the official Grazalema Pueblos Blancos route. Today, we’re driving you through this unique road trip that explores 19 villages, all located in the provinces of Cádiz and Málaga. Not only is this route stunning but it’s one of the best chances to get a real insider view of inner Andalusia and its most traditional gastronomy.

The variety of landscapes and different villages probably deserves no less than a week-long tour to make it full justice. Unfortunately, we have only four days to visit a selection of the most popular destinations, making sure we still enjoy enough time to stop by and taste the local specialities.

We’re starting our journey in Arcos de la Frontera. On top of a cliff and with dramatic views over the Guadalete river, this small town is a labyrinth of steep narrow streets full of little bars and restaurants. Most serve traditional dishes such as ‘chickpeas with rosemary’ or the ‘serrano gazpachos’, an evolved version of the traditional gazpacho but served with small dices of iberico ham as a topping. A good place to taste it is the ‘Taberna de los jóvenes flamencos’, a charming little tavern blessed with local joy and where if things unfold as usual, you’ll very likely end staying for a drink or two.

We are in the province of Cádiz and that of course shows during breakfast, when the ‘molletes’ are a constant presence. The ‘mollete’ is a soft round white bread, very traditional in Andalusia, where it’s usually served slightly toasted with extra virgin olive oil and a pinch of salt. Occasionally the olive oil is replaced by pork lard, making the mollete the perfect companion to more consistent meals.

Although the best place to buy molletes is Antequera, in the Málaga province, there is also a great producer near Arcos de la Frontera, in the village of Espera. It’s called Panificadora la Paz and you should pay them a visit if you’re after some proper homemade molletes, as well as some of the traditional ‘picos’ bread that Andalusians eat as a side dish with pretty much every meal.

The rainiest region in Spain

Contrary to the popular perception of a sunny Andalusia, the Sierra de Grazalema is the rainiest region in Spain. The permanently moisturized micro-climate preserves the fields with an ever bright and vivid green colour, which shares the land with colossal extensions of olive groves that produce not only huge volumes of olive oil but very high quality ones too.

It’s not a coincidence that the olive oils from this region enjoy a ‘Denominación de Origen’ (Designation of Origin), the highest quality label that Spanish food products can achieve.

The protagonism of the olive oil is ever present in recipes such as the ‘sopas cortijeras’ from Setenil de las Bodegas, a small village of great popularity due to its impossible houses sculpted directly in the rock, under the mountain. It is in this dramatic scenario where you can taste these soups made of bread, olive oil and green asparagus topped with a poached egg. The restaurant ‘El Mirador’ will offer you the opportunity to taste an excellent version of this recipe accompanied with some fantastic local ‘chacinas’, as well as an extraordinary view over the village. 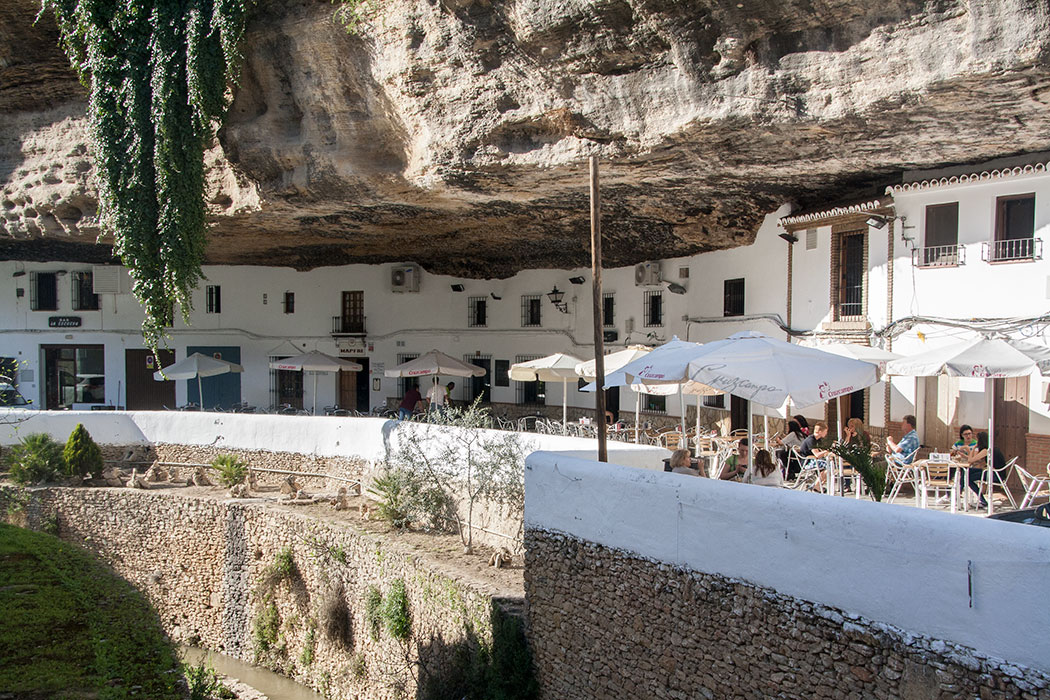 Not far from Setenil de las Bodegas, we discover one of the most beautiful villages of our route. White and elegant, Zahara de la Sierra spreads over a hillside overlooking a lake with stunning turquoise waters. Surrounded with cereal fields, still green at this time of the year, the impressive view foreshadows a great gastronomic experience.

Not sooner said than done. Several years ago, American chef Stefan Crites moved to Zahara searching for tranquility and a better quality of life. After spending over 12 years working in various New York kitchens, both Stefan and his wife Mona started their own project, a family run hotel called Al Lago.

Today, the restaurant kitchen offers traditional cuisine with a modern twist, focusing on seasonal and local produce such as the red tuna from the Cádiz coast or mushrooms from the neighboring forests.

However, a little personal licence reveals the true origin of the chef. It comes when we order a dessert and an unusual New York-style cheesecake seems to catch our attention. It’s this cheesecake, in a strange but sensible way, that leads us to our next foodie destination.

There are plenty of gastronomical gems around this area. But if we would need to pick just one, that would have to be the Payoyo cheese. Popularly known as the ‘treasure of Grazalema’, the intense flavour of its matured version and the buttery flavour of the semi-cured one is the unquestionable star product of this region. It receives its sonorous name from the local Payoya goats, also known as montejaqueñas. 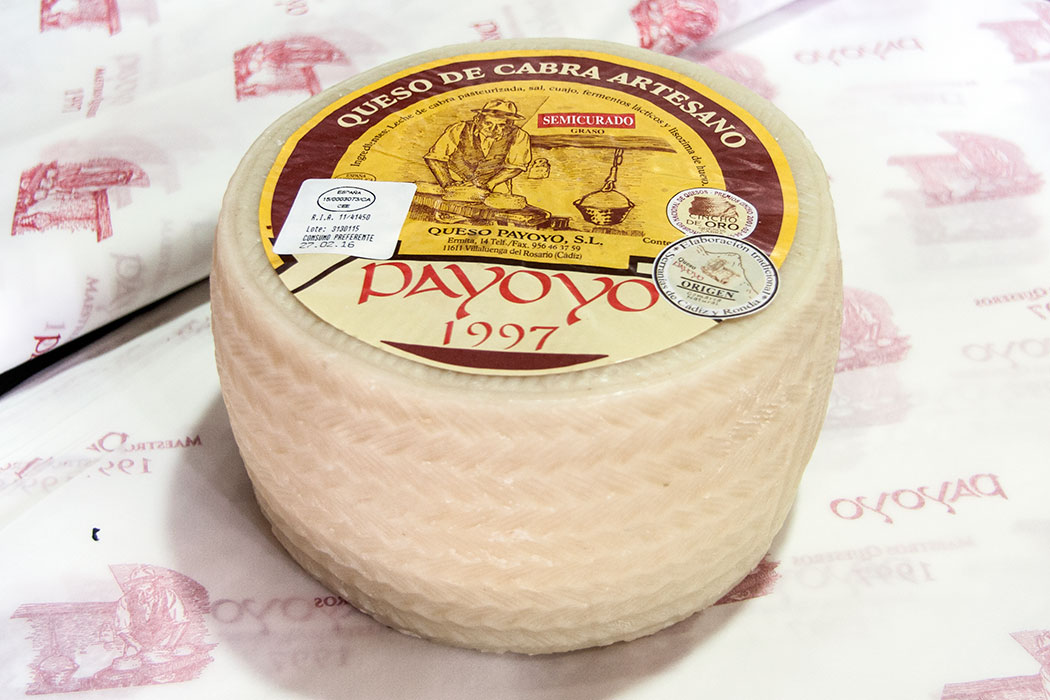 Contrary to the general believe, Payoyo is not a type of cheese but the name of a commercial brand that brings together various different types of goat, sheep and mixed-milk cheese. Its outstanding quality has been recognized all over the world and during the 2014 World Cheese Awards, it won up to 11 awards including the highest distinction (super gold medal) for its sheep milk mature cheese.

The factory hides on the hillsides of Villaluenga del Rosario. Of course, we couldn’t miss a visit to the small shop where you can buy all the products under the Payoyo brand, as well as attend cheese-making workshops. 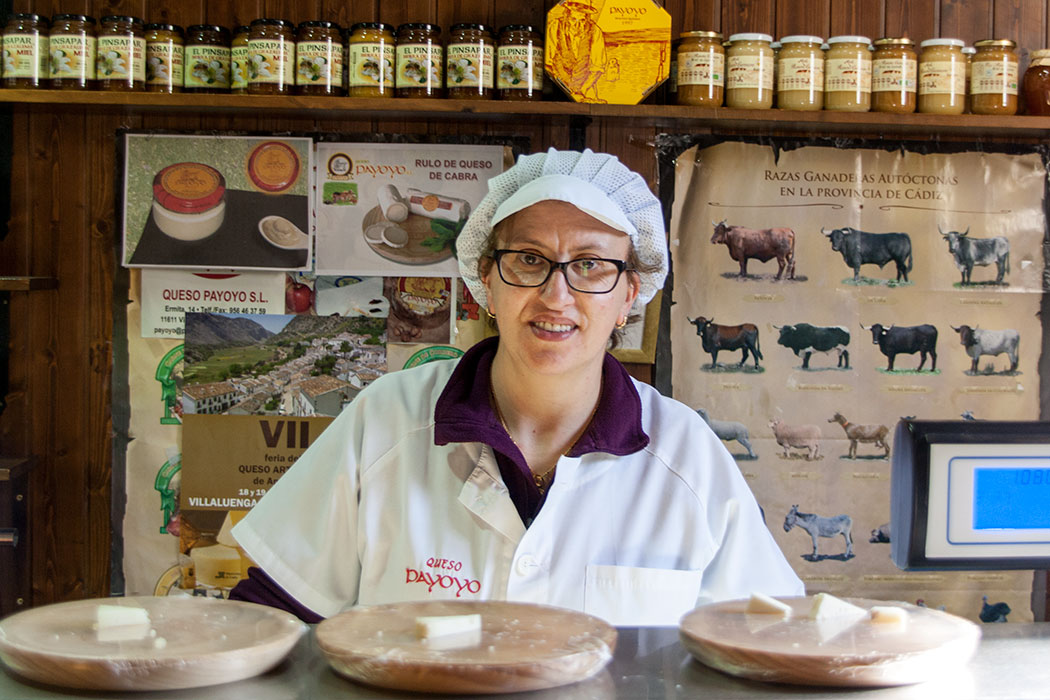 This marks the end point of our trip through the stunning ‘pueblos blancos’ and the endless olive groves. We’ll continue our way through Andalusia, although this time we’ll travel towards the coastal drylands of the south. From Grazalema, we take with us the traditional flavours, the surprisingly good cheese, the never-ending valleys, the bright Andalusian green and plenty of good energy that will motivate us to keep exploring new corners of this beautiful part of the world.

The ‘pisto manchego’ is our Spanish ‘ratatouille’, a super healthy and flavoursome traditional recipe which works equally well as a main or as a…