Calçots are slowly making it into the Spanish-food hall of fame. But what is it so special about a scallion that everyone seems to be going crazy about them? We explain you what they are, how to cook them and also what is the best technique to eat them.

Only some few years ago, very few people outside Catalonia had heard about calçots. In recent years though, this wonderful variety of scallion has started to make it everywhere. Dozens of articles in some of the world’s best publications show how foodies all over the planet are feeling a strong attraction towards a product that has been enjoyed in the Catalonian province of Tarragona for many centuries now.

Today, Spanish restaurants from all around the world celebrate the calçots season and compete to offer the best calçotadas (calçot-based meals). Is this another temporary foodie trend? We don’t think so. Don’t you believe us? Try them out if you haven’t already and we’re pretty sure that you’ll be joining the rapidly expanding club of calçots fans.

WHAT EXACTLY IS A CALÇOT?

The calçots are a variety of scallion or white onion that are cultivated in a very particular way with a clear purpose: to increase the length of the bulb to somewhere between 15 and 25 centimeters. As a result, the calçots end looking much more like a small leek than a conventional onion.

In order to achieve this unusual length, the calçots are planted in trenches by the end of August, like any normal onion. During the months following their plantation, farmers successively increase the level of soil around the stems so that the plant gets forced to grow upwards, desperately looking for the natural light. This process is known as ‘calçar’ –Catalan for ‘to wedge’, meaning ‘to cover the trunk of a plant with soil’– hence the name of ‘calçot’. The outcome is a long white stem that has a very characteristic mild, sweet and delicate flavour. 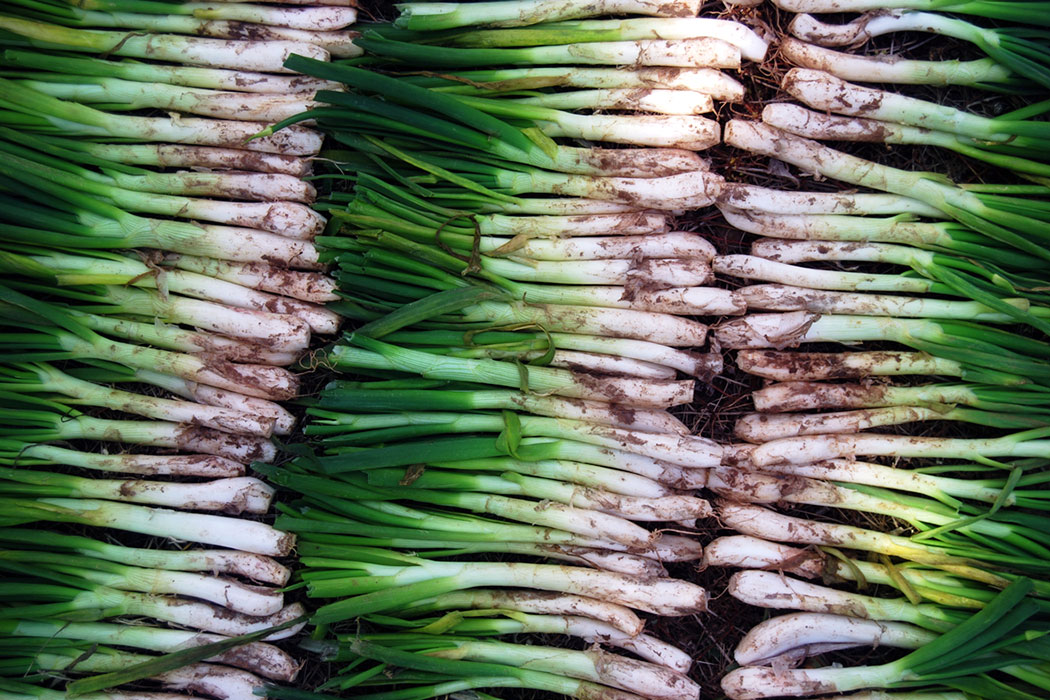 WHERE DO THEY COME FROM?

The calçots are farmed in several regions of Spain and even France too. In fact, despite its Catalan origin, 70% of its production comes from the the La Mancha province of Toledo and more specifically from the locality of Consuegra, where instead of calçots they are known as ‘cebolletas’.

Having said that, the most famous calçots are the ones coming from Valls, in Tarragona. They are controlled by a registered EU Protected Geographical Indication, which recognizes the high quality of this product and establishes a set of specific requirements that local farmers must comply to. For instance, the calçots from Valls can only be planted using onions from the Allium Cepa L. variety, which is the one that guarantees the quality and characteristics of this unique delicatessen.

The calçot season runs from November to mid April, although the experts state that the best pieces are enjoyed from January to February, when they reach their optimum sweetness and texture. That is the reason why the main calçotadas are celebrated during this period. The most famous one, the calçotada in Valls happens yearly during the last Sunday of January, precisely to celebrate the peak of the calçot season (and not the start of the season as many believe).

HOW TO COOK A CALÇOT

Calçots can be cooked in many different ways: oven-baked, deep-fried, boiled, steamed… However the most popular and representative way to cook calçots –and the way it is done in the traditional calçotadas– is to chargrill them over an open fire made with ‘sarmientos’ (Spanish for vine branches). Once chargrilled, they are grouped in bunches of up to 20 units and wrapped into newspaper-made rolls to keep them warm. Finally, they are placed on a terracotta tile and served together with calçots sauce, a very similar sauce to the Salvitxada and the Romesco sauce that we showed you how to do in this recipe. 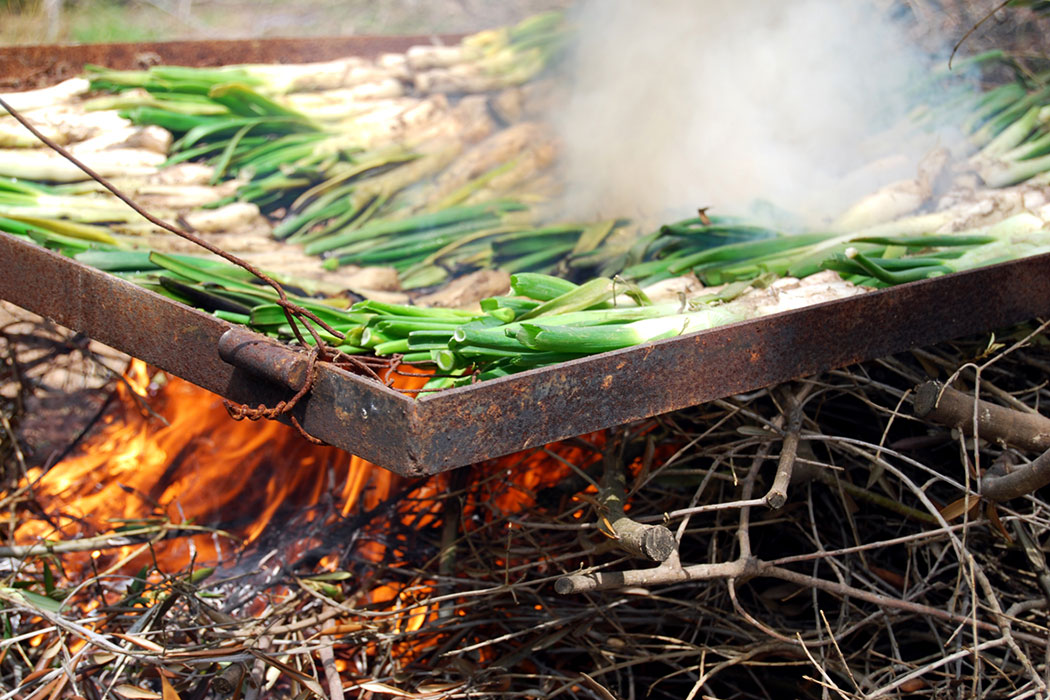 How to make Romesco sauce

Learn how to make the perfect sauce for your calçots

HOW TO EAT A CALÇOT

Eating calçots can be a very messy affair. So the best way to prevent a nasty surprise on your new shirt is to wear a paper bib (yes… a paper bib… even in the poshest restaurants you’ll get one if you’re about to eat calçots!).

Once your clothes are secured, you need to peel the calçot before you eat it. To do that, pick one of the chargrilled calçots and hold it with one hand from the green extreme of the stem. With the other hand, pinch gently the opposite extreme of the bulb, squeeze and peel off the fire-blackened outer layer. This should come off very easily and in one piece. Once peeled, dip it into the calçot sauce and hold it high over your mouth before you take it.

Now, if it would be me, I’d also have a good glass of red wine to help me digest the calçots!

Every year, many towns in the province of Tarragona celebrate the traditional calçotadas, an annual event where friends and families come together to enjoy a calçots feast followed by plenty of grilled meat and accompanied with generous amounts of red wine.

Some of the most popular ones also organize calçots eating contests –the current record is 3.8 kilogrammes in under an hour!– and calçots sauce competitions which award the best recipe. The one in Valls is the most famous one and travelling there just to witness the festival is well worth the experience.

So we hope you have learnt a little bit more about why the calçots are so special. Now, why don’t you start planning a trip to visit one of the calçotadas? Or perhaps you’re lucky and your favourite Spanish restaurant next door is planning to offer a calçotada this year!

Where to eat calçots in York, UK
Ambiente Tapas

Where to eat calçots in Leeds, UK
Ambiente Tapas

Where to eat calçots in Southbourne, UK
The Larder House

Where to eat calçots in Cowbridge, UK
Bar 44 Cowbridge

Where to eat calçots in Cardiff, UK
Bar 44 Cardiff

Where to eat calçots in Penarth, UK
Bar 44 Penarth

Where to eat calçots in Liverpool, UK
Lunya Liverpool

Where to eat calçots in Manchester, UK
Lunya Manchester

Only few times one has the pleasure to chat with someone so convinced about generosity as a mean to procure everyone else’s enjoyment. If…